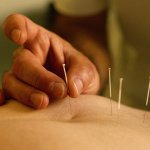 A sample size of 90 participants were randomized into three groups. Group A received acupuncture at LI4 bilaterally, group B received placebo needles and group C received only routine oocyte retrieval. Pain intensity levels immediately after the operation and one hour later were significantly lower in the acupuncture group.

Objective testing revealed that acupuncture promoted significantly higher levels of NPY (neuropeptide Y) in the follicular fluid whereas the control and placebo groups did not. NPY is involved in reducing anxiety, stress and pain levels. Increase NPY levels can lower blood pressure, control epileptic seizures and affect circadian rhythms. The researchers concluded, “The analgesic effect of acupuncture at Hegu in transvaginal oocyte retrieval using ultrasonography may be related to the increase in the NPY level of the follicular fluid.”

This type of research is not isolated. In a randomized, controlled study of 150 women, researchers at Goteborg University studied the effects of needling Hegu (LI4) and concluded that electroacupuncture “may be a good alternative to conventional anesthesia during oocyte aspiration.” Another randomized, controlled acupuncture study concurred with the most recent research and measured increased NPY concentrations in follicular fluid in women undergoing oocyte aspiration. The researchers noted that the pain relieving effect of acupuncture, in this case electroacupuncture, were “as good as those produced by conventional analgesics.” The researchers also noted that increased NPY levels promoted by electroacupuncture “may be important for human ovarian steroidogenesis.”